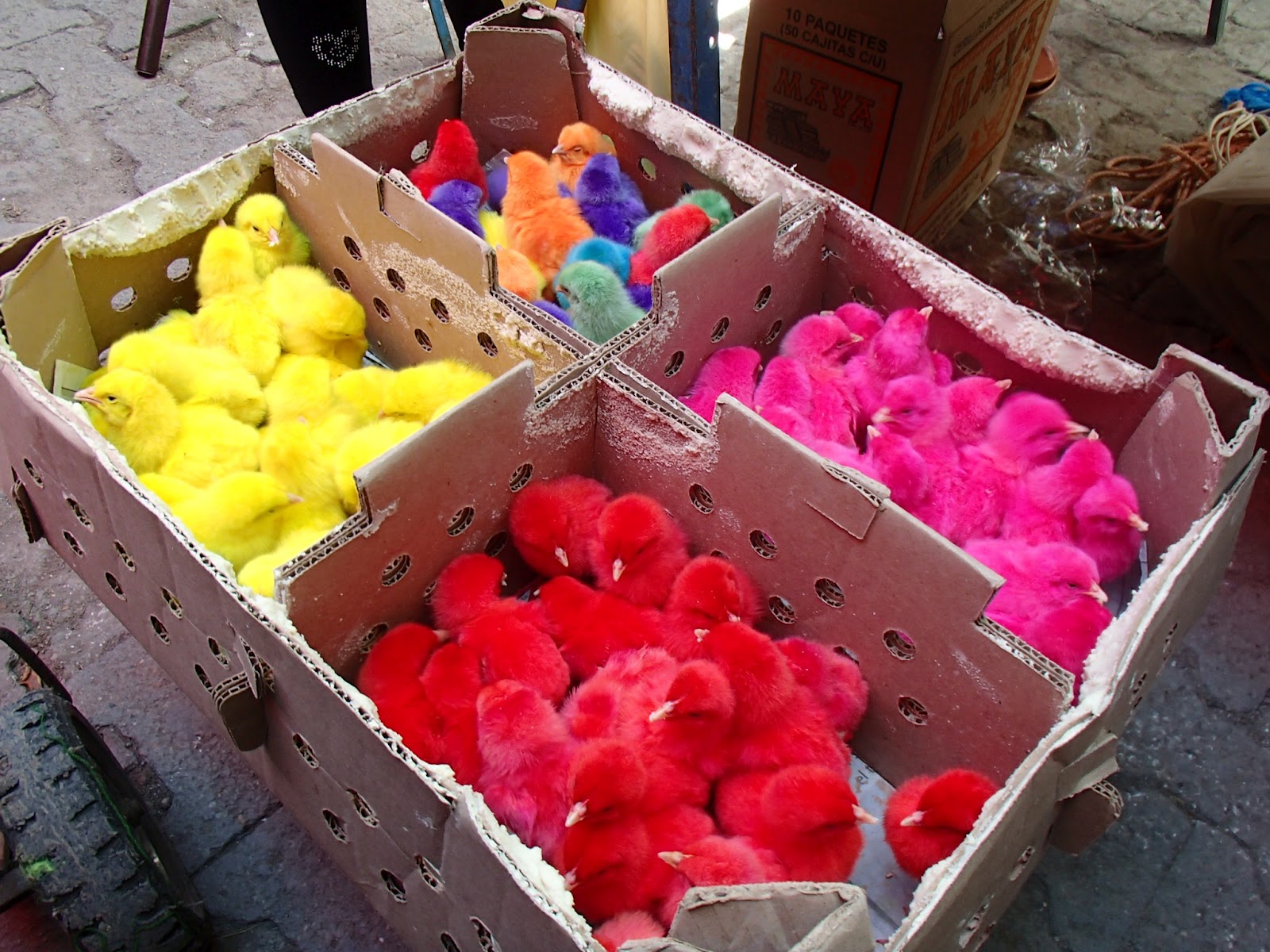 We are jumping back quite a bit, months actually but hey we have to at least try to catch up sometime.  We will be going back and forth on posts so bear with us.  Our blog is for us to remember and to share our experiences and info with you even if it is a few months behind or a half a year in this case.  We are currently updating this post from Jaibalito, Guatemala.  Life here has been full of practicing Spanish, making friends (out of clay mostly, easier that way), hosting people, Teaching Pilates, Guiding Hiking around the Lake and border runs to Mexico.
The following took place in June of 2012
We must say that Oaxaca so far has been one of our most favorite spots we have been so far.  It could be that we were there for six weeks and were able to meet some great people who we will never forget, you could say it is the Chocolate that permeates through the streets or the availability of fresh produce from all over the country.
Oaxaca has a lot going on.  For our interests it can be divided into five different sections, the central city, and outside of the city in all four directions of the North, South, West and East.  There is always an event to attend to in the city itself from museums, galleries, magnificent churches, great food and dining, salsa dancing and music from all over every night of the week. In our case, we mostly liked to hang out at the local Mercados :)

The area to the East of Oaxaca is a popular tourist route that some call the Mitla Tour with several stops that are minutes from the highway.  The best day is on Sunday to catch up with the Tlacolula Tiange (weekly Mercado) which fills the streets with cheap deals from goat soup, Oaxacan pottery, wood work and textiles, the weekly turkey or your colored chick and don't forget all of the Chocolate and Mezcal tasting that is offered on the streets. 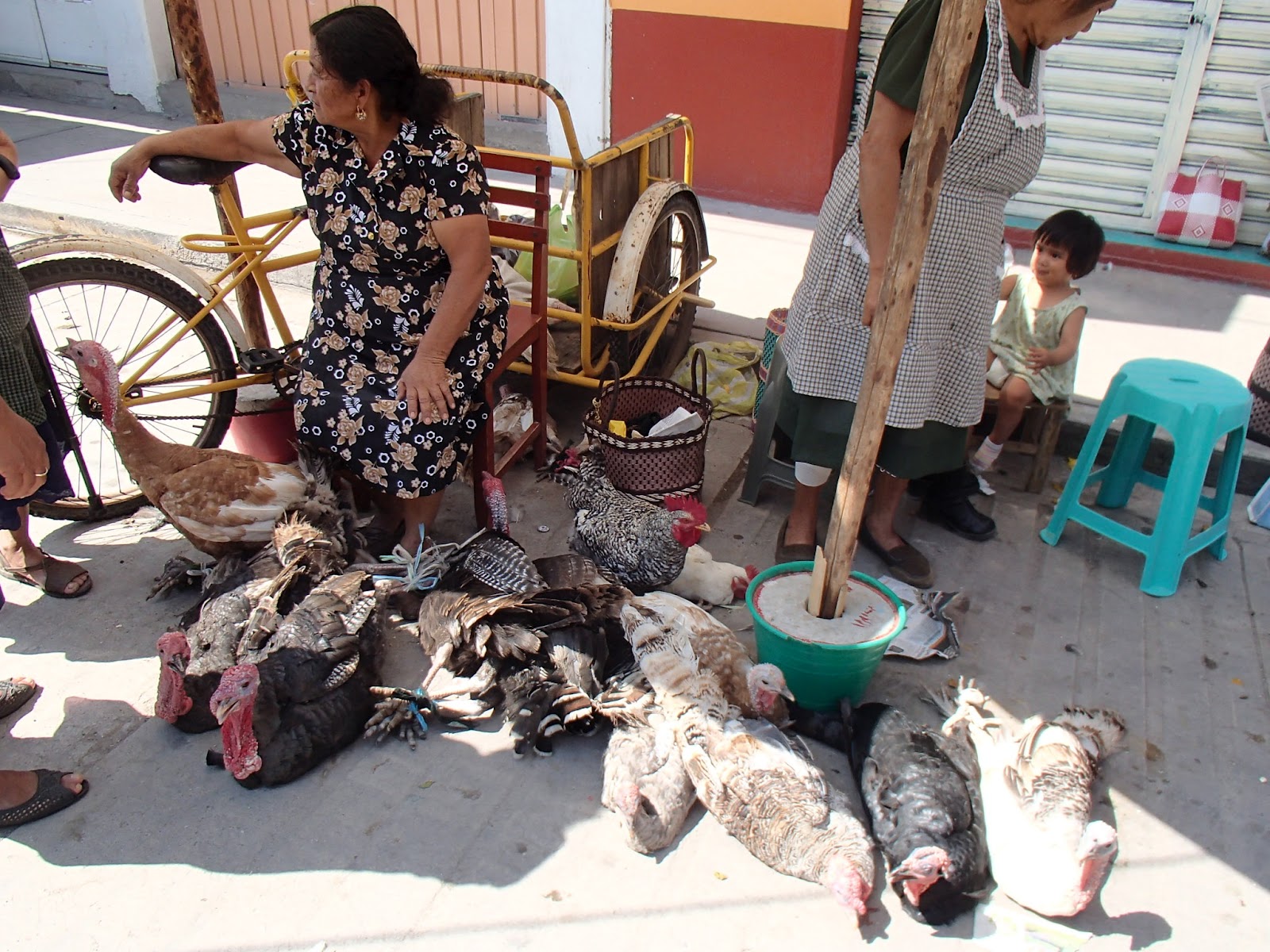 The "Hall of Smoke" can not be missed, here you can buy some fresh cut meat, onions and peppers from the side vendors then turn around and grill them up on the charcoal grills that run the entire length of the hall. 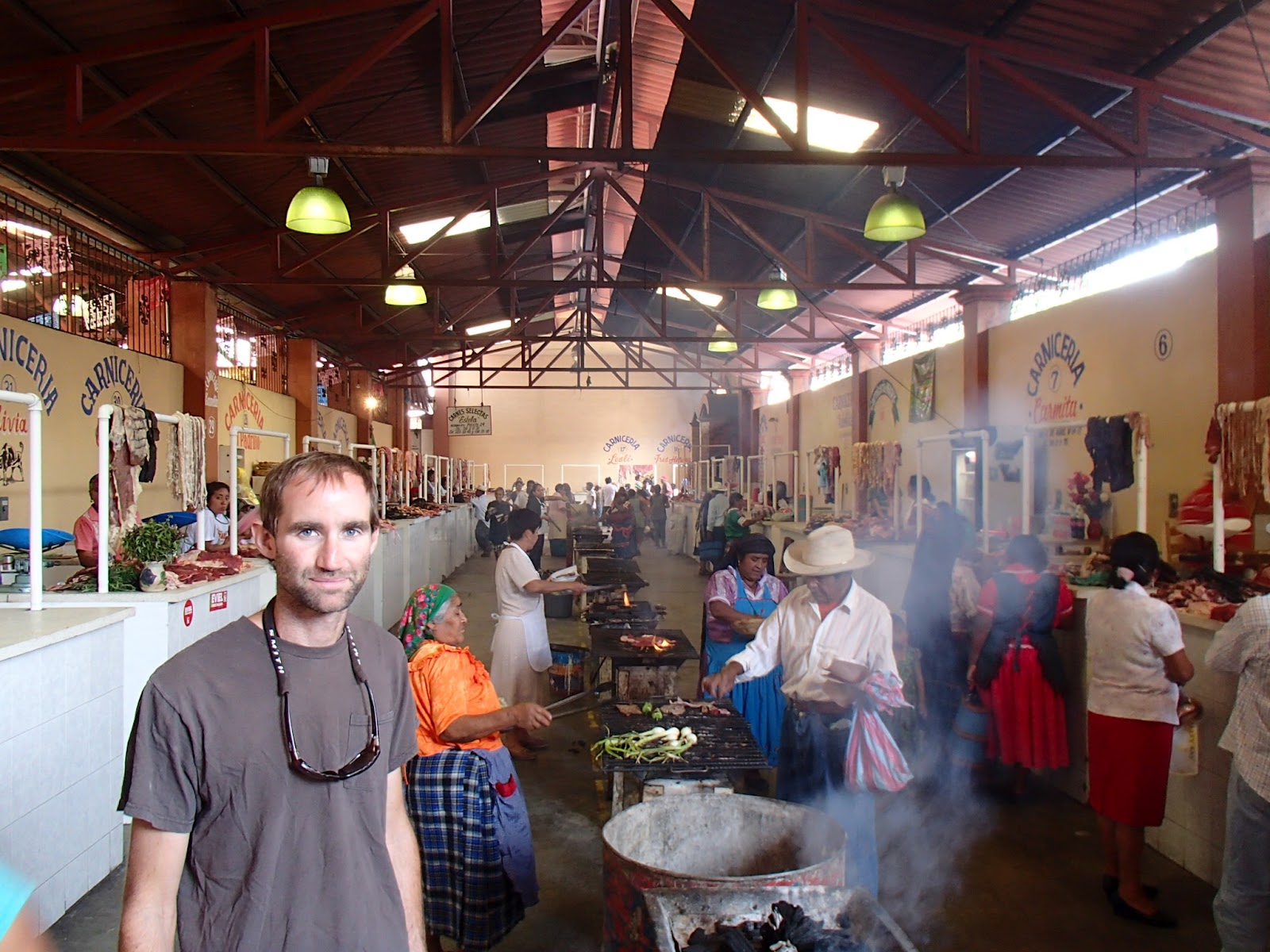 We opted for a bowl of "Chivo" goat soup which is pulled fresh from the bone. Oaxacans can Cook! They are all about tasty food. 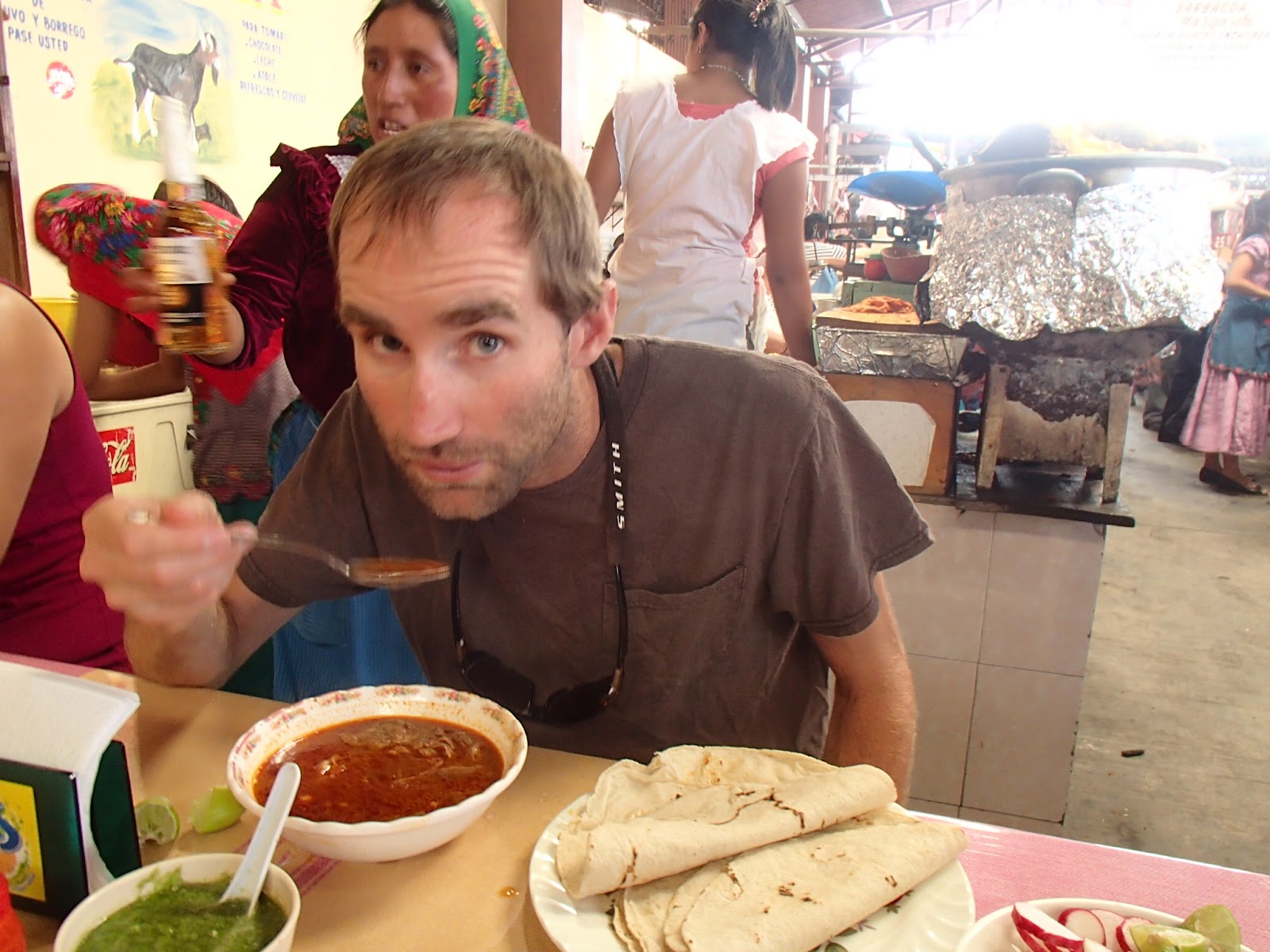 Aneta's favorite man, the Cacoa bean grinder man who makes her most sought after concoctions. 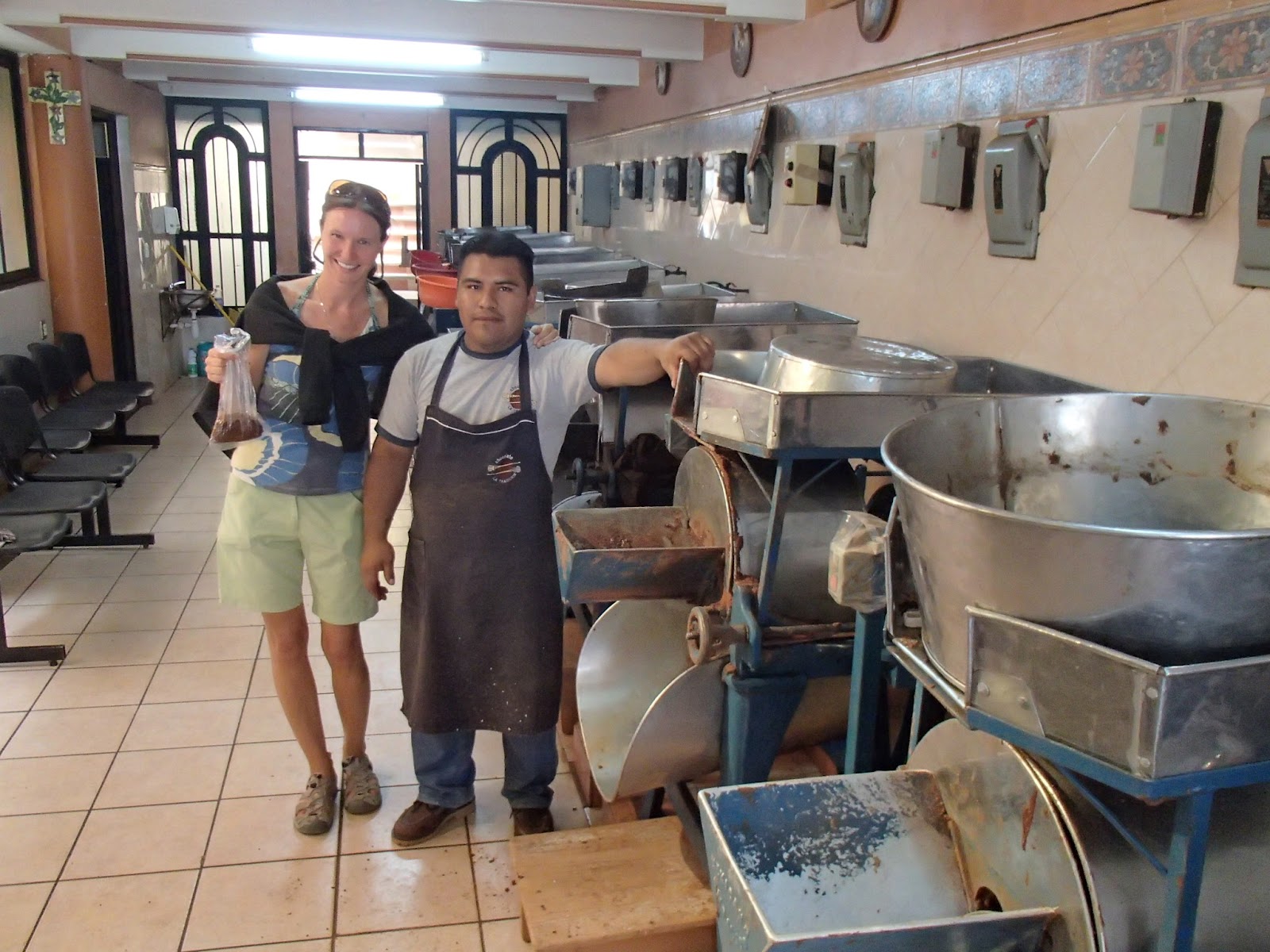 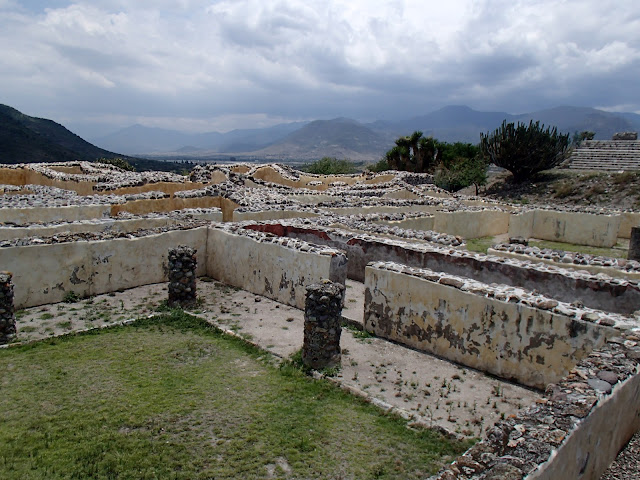 After a quick lunch at the ruins we stumbled upon the Valle Oaxaca Distillery.  It  puts out some quality Mezcal and one of the most fun and best tours of any distillery we have ever been on.  We were honored with a private tour of this very classy and authentic distillery. 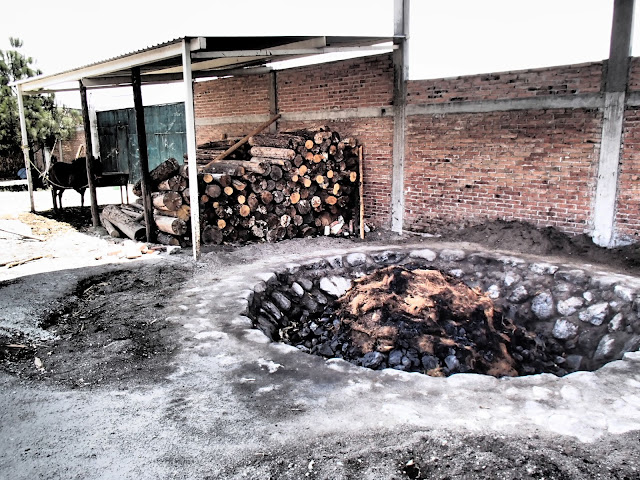 The piña or center of the Agave/Maguey plant is roasted in large pits with hearty oak, surrounded with large rocks for a few days.  This is where it receives it's distinct smoky flavor and differs from Tequila which are both made from the Agave plant.  Some people do not take a liking to Mezcal however just like any product there are horrible Mezcals and there are super smooth ones that stand up to the finest Tequilas. 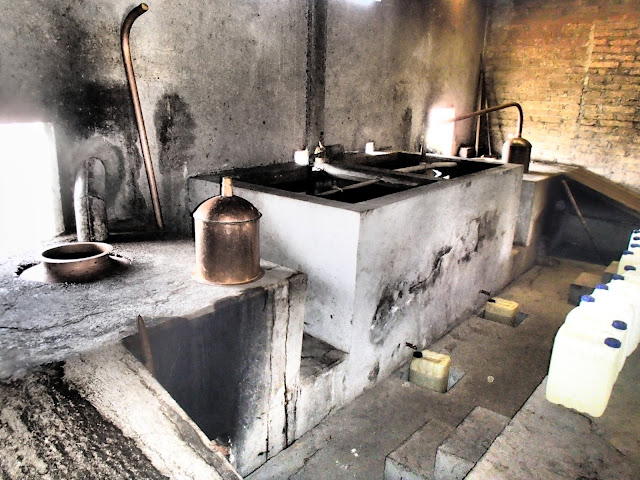 We were fortunate enough to have a taste straight from the barrel. 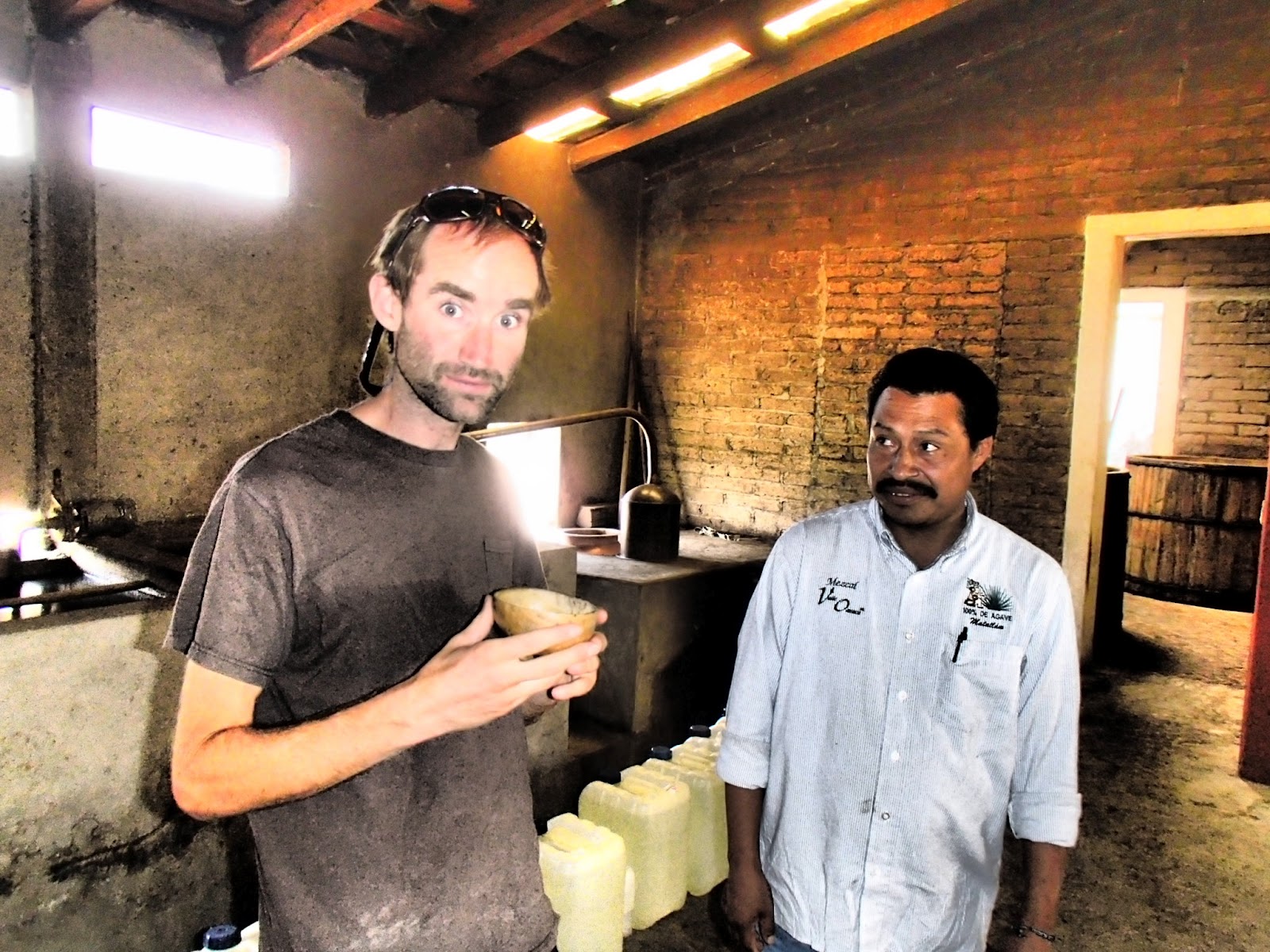 After some tasting in the back we were treated at this full service Mezcal bar with every flavor of Mezcal. 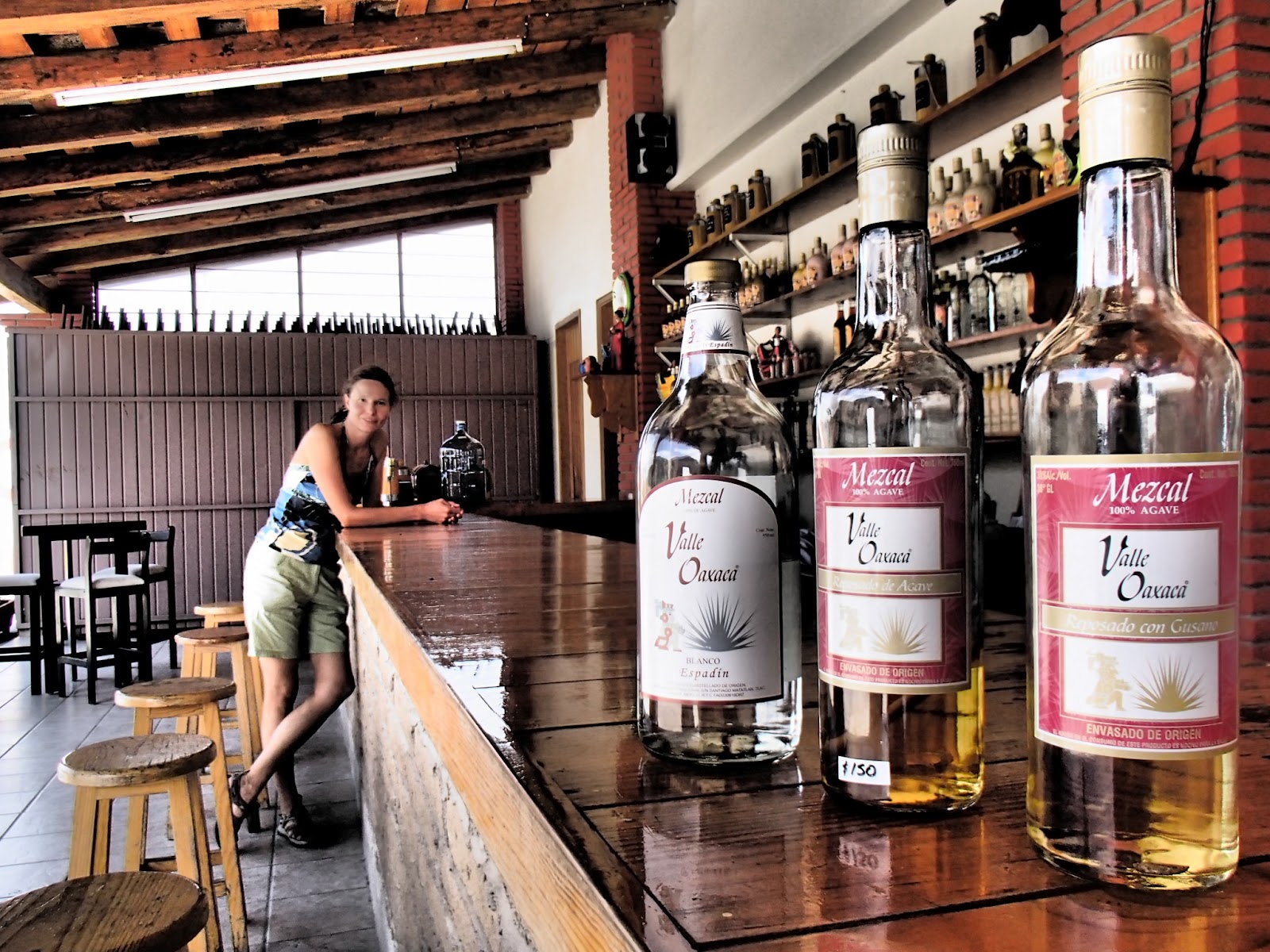 Our bartender going all out.
After Mezcal tasting, the ruins of Mitla was our next stop down the road. When we pulled into town there was a pushy textile seller that wanted us to come into their store, so we did and took a few pics of the dresses Aneta tried on, (mostly took the pics so she could see what the dresses looked like on her because they did not have a mirror) we left without buying anything and were accosted and they wanted to charge us 10 pesos for the pictures, we told them to get a mirror and we wouldn't have had to take any pics. 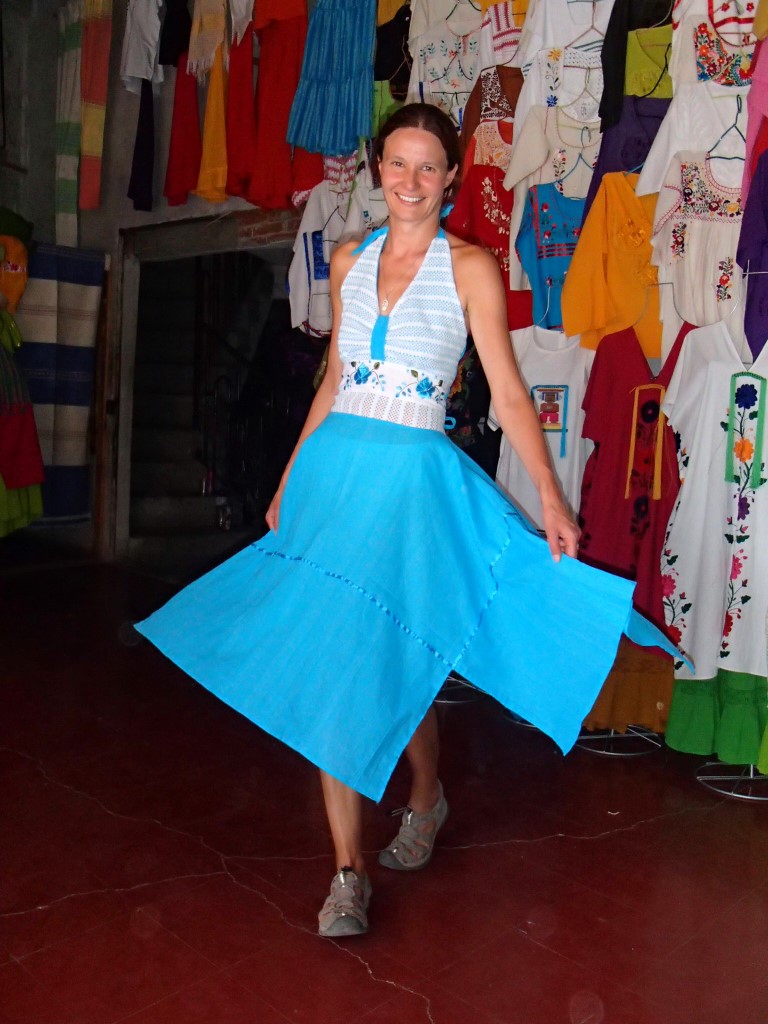 Mitla, built by the Zapotecs, is known for it's ornate stepped-fret mosaics in several differnet designs made from small finely cut stone pieces that are fit together without the use of mortar, there is no other site like this in Mexico. It was a very important city in the area functioning as a power center between 950 A.D. and 1521 A.D. until the Spainards came.  The Spainards then put a church (real smart guys) on top of the spot which the Zapotecs believed led to the lord and lady of the underworld to keep the "Devil" from escaping. 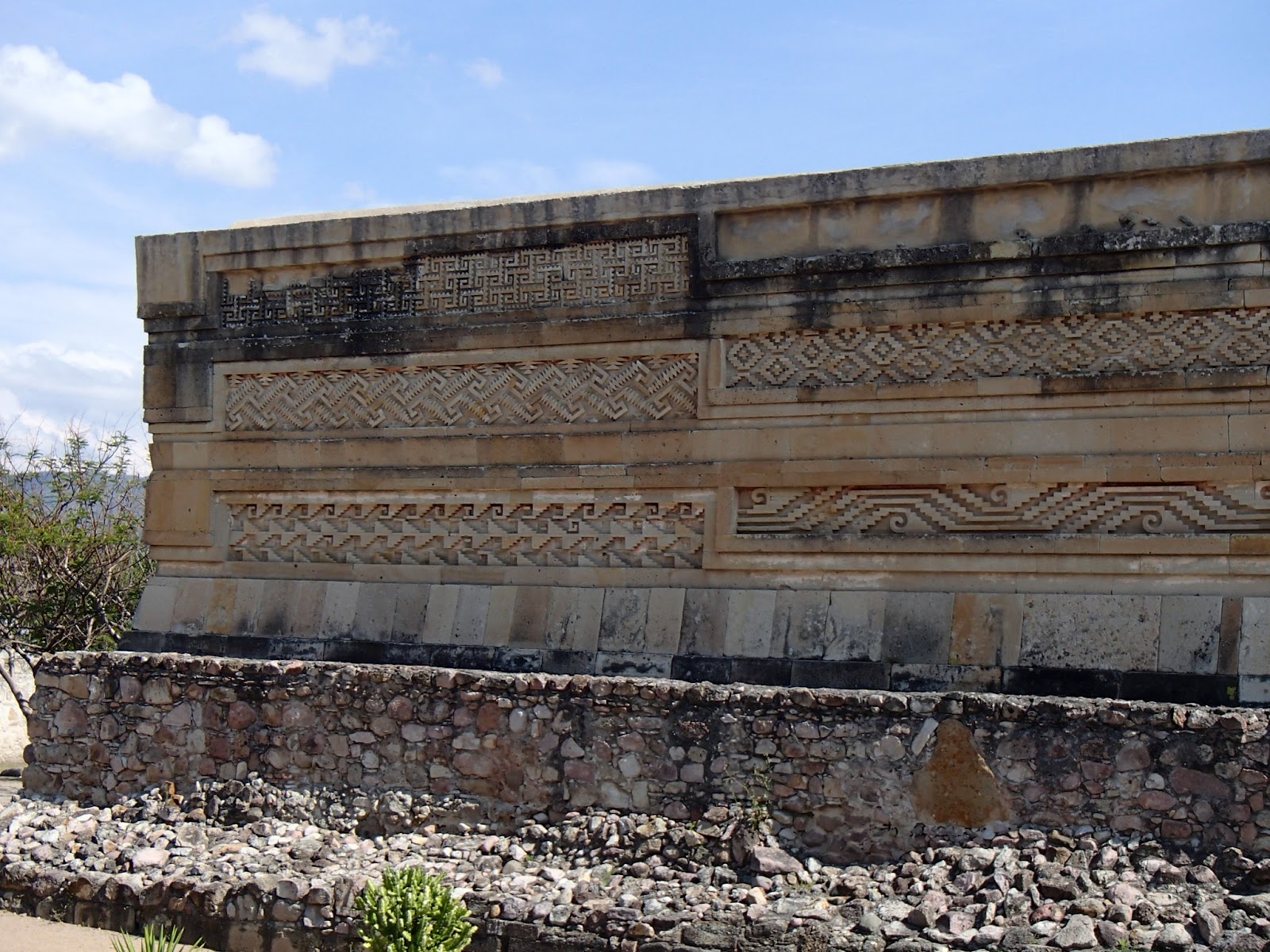 On our way to Hierve de Agua.  On the way even before we left Milta we noticed three hitch hikers that didn't look too shady.  So we pulled over and they said they were going to Hierve where we were going.  They were from Czech Republic, Spain and Mexico.  Until now we have not been able to give anyone a ride except for short rides on the bumper to locals because in Steamboat we took out our back seats and we do not have room but on this day most of our stuff was back at the apartment.
Our last stop was Hierve el Agua which means the water boiling, however it is just bubbling water really though.  It was very rocky, steep and windy mountain road but we made it and the views were worth it.  The site is known for it's calcified formations that look like waterfalls from a distance that formed over thousands of years.  I believe that there is only one other site like this in the world which is somewhere in Turkey.  More on it here, Hierve el Agua. 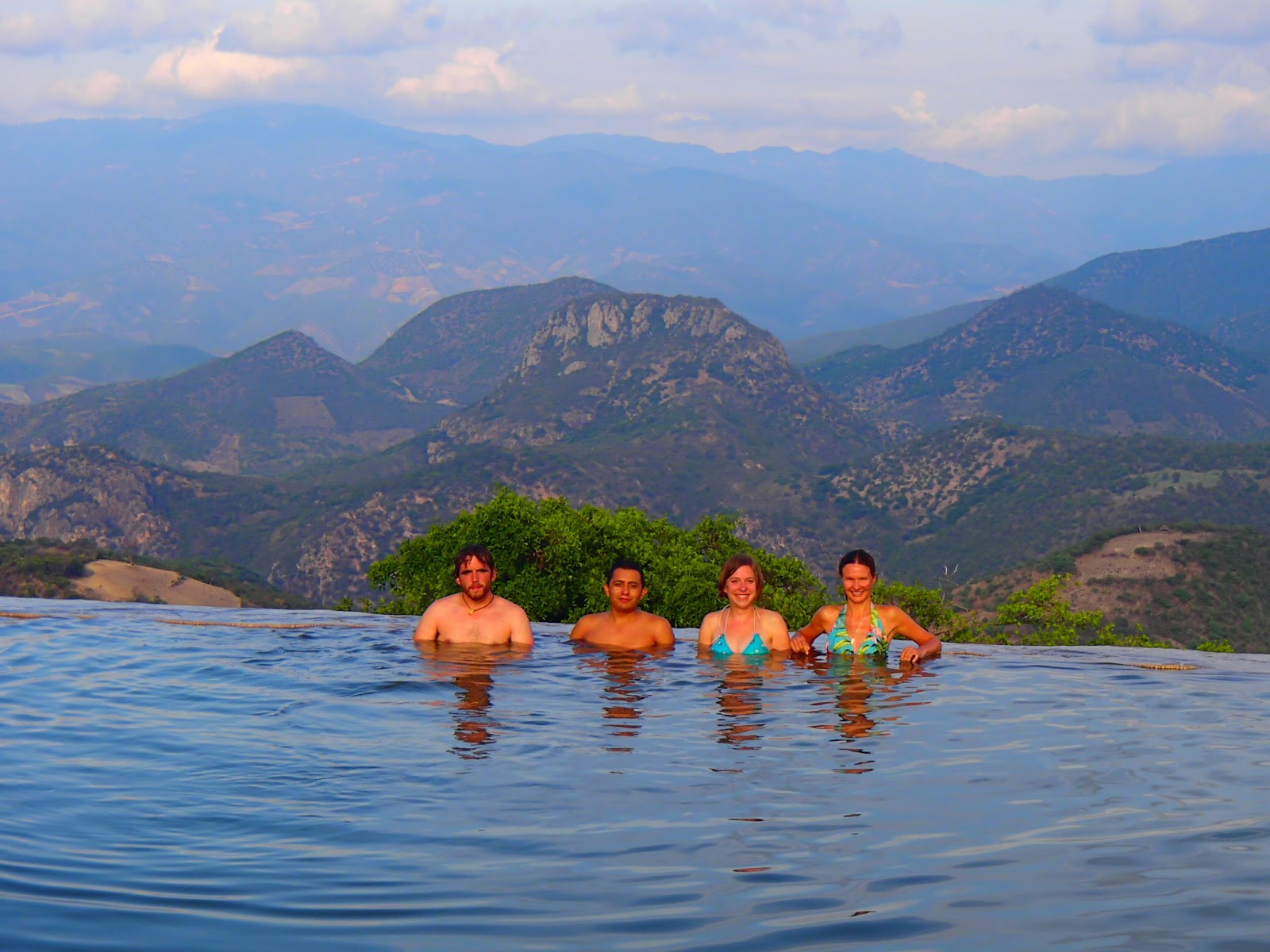 It was late in the evening and cooling off quick but these four (I was a bit sick and didn't want to agitate it any more) decided to take a dip in the pool which is right on the edge of the cliff, it is like an infinity pool in the mountains. 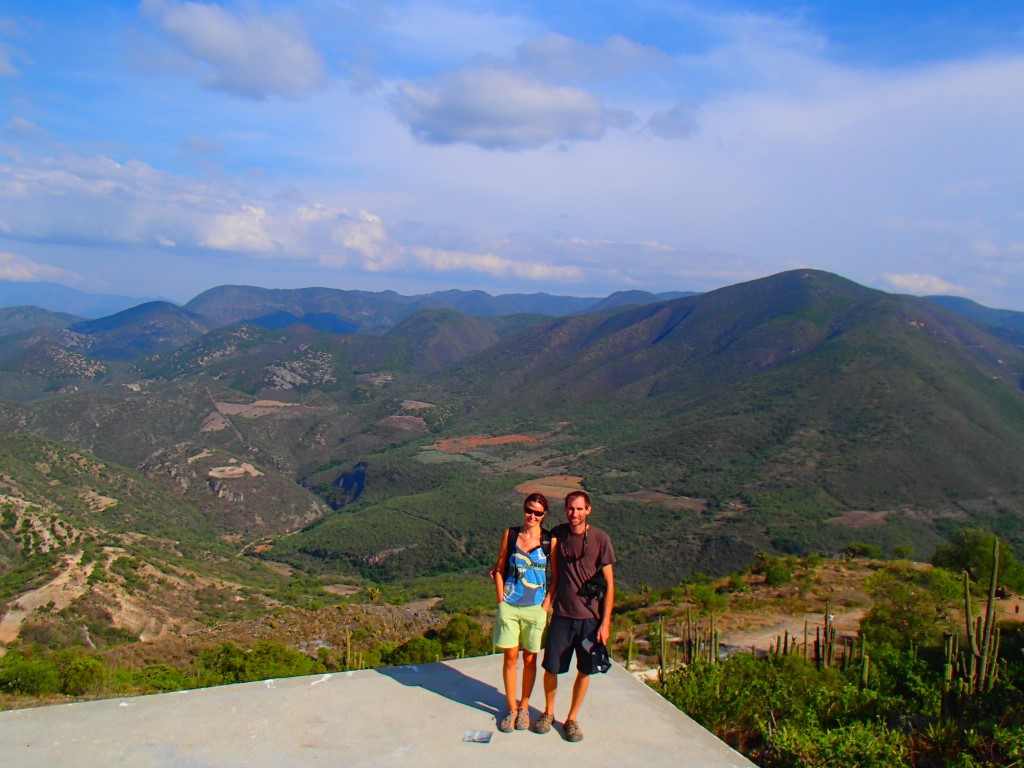 Adios Amigos, till next time....


Posted by Aneta and Aaron at 4:38 PM No comments:

Help us go the Extra Kilometer